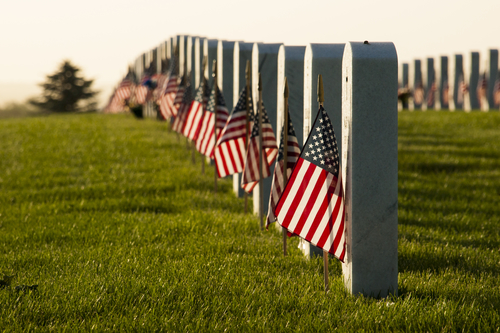 This Memorial Day, give thanks to those who lost their lives while serving our country.

I saw a nice meme the other day from a fellow veteran which said:

Memorial Day is for the fallen. Please don’t thank me this weekend.”

That’s true. Veterans get recognized on Veteran’s Day in November. Memorial Day, by contrast, is for those who did not survive.

It was established by a group of Union veterans. And it was first observed in May, 1868, as a time to honor fallen soldiers by placing flowers at their grave. May 30th was selected because it was believed that flowers would be in bloom around the country at that time. Flowers were placed at the graves of both Union and Confederate soldiers.  General James Garfield gave a speech at Arlington National Cemetery.

It was not until after World War I that Memorial Day became a day to honor soldiers who died in all American wars. And the first State to recognize this holiday was New York in 1873. Southern states, however, did not recognize it at first. In 1971, Congress passed a law recognizing Memorial Day as a national holiday.

Today, small flags are placed on each grave at Arlington Cemetery.

It is located in Washington, D.C., and is the site of the Tomb of the Unknown Soldier. The President or Vice President lays a wreath at the Tomb, honoring those service members who have died while serving our country. Most communities will hold some type of service to honor those who have fallen.

As a veteran, it has special meaning to honor our fallen comrades. I grew up hearing about those who served in Vietnam, Korea, and World War II. And I was on active duty during Operation Desert Storm. In all these conflicts, service members gave their lives to protect our country. Take a moment this Memorial Day to remember them, and to honor them.